Hierarchies play a key role in data modeling as they provide an easy-to-use navigation aid when drilling through lots of data. As the user clicks on the hierarchy node, the node is expanded to offer even more lower level values. Typically, measures are accumulated from the lower level to the upper levels. A lot of business data is organized by hierarchy so this is a very popular topic for modeler.

Let's take a look at an example of each type of hierarchy: 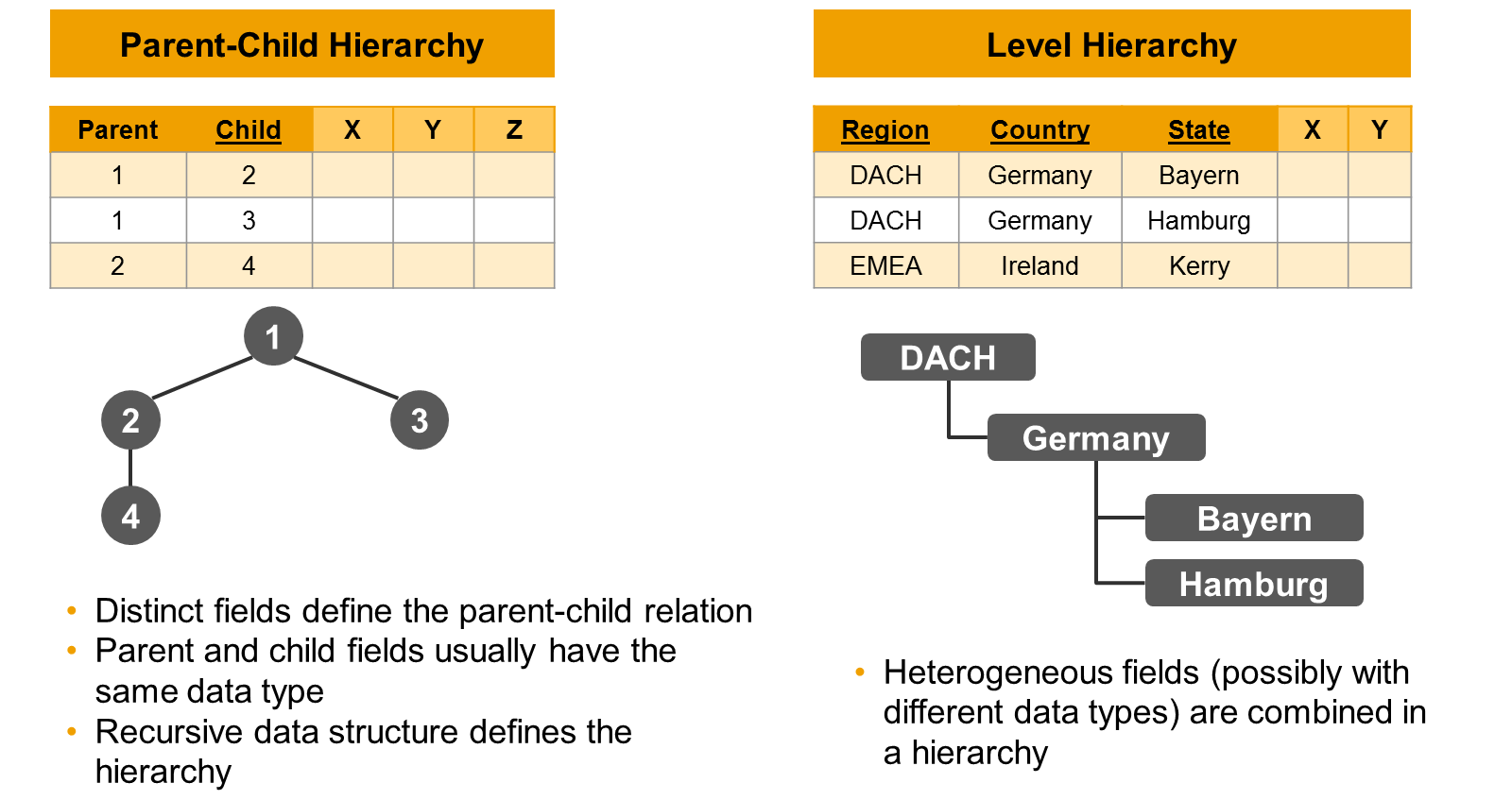 A level hierarchy is defined by choosing columns from a source data set and organizing them in a sequence that provides a drill down path. Each level is based on a separate column in the source data.

Node styles are used to define the output format of a node ID.

A level type specifies the semantics for the level attributes. For example, the level type TIMEMONTHS indicates that the attributes are months such as January, February, or March.

The level type REGULAR indicates that the level does not require any special formatting.

Using the Order By drop-down list, an attribute can be selected for ordering the hierarchy members in the order specified in the Sort Direction column.

An orphan node in a hierarchy is a member that has no parent member.

When creating a parent-child hierarchy, the first step is to define the nodes that make up the hierarchy.

You can define multiple parent-child pairs to support the compound node IDs. For example:

Multiple parents and compound parent-child definitions are not supported by MDX.

Advanced Properties of a Parent-Child Hierarchy

Additional attributes can also be added to the hierarchy, making it easier to report on.

The Aggregate All Nodes property defines whether the values of intermediate nodes of the hierarchy should be aggregated to the total value of the hierarchy’s root node. If you are sure that there is no data posted on aggregate nodes, you should set the option to False. The engine then executes the hierarchy faster.

In a parent-child hierarchy, you might encounter orphan nodes without a parent. The Orphan Nodes property defines how these should be handled.

If you choose to assign an orphan node to a step parent, the following rules apply:

The Root Node Visibility property is used to define whether an additional root node needs to be added to the hierarchy.

Cycles are typically not desirable in a hierarchy.

In such cases, the Cycles property is used to define how these should be broken when encountered, or whether an error should be thrown.

Time dependency is supported for more complex hierarchy data, such as human resources applications with their organizations, or material management systems with BOMs where information is reliant on time.

Defining a time dependency is only possible in calculation views, and for parent-child hierarchies. 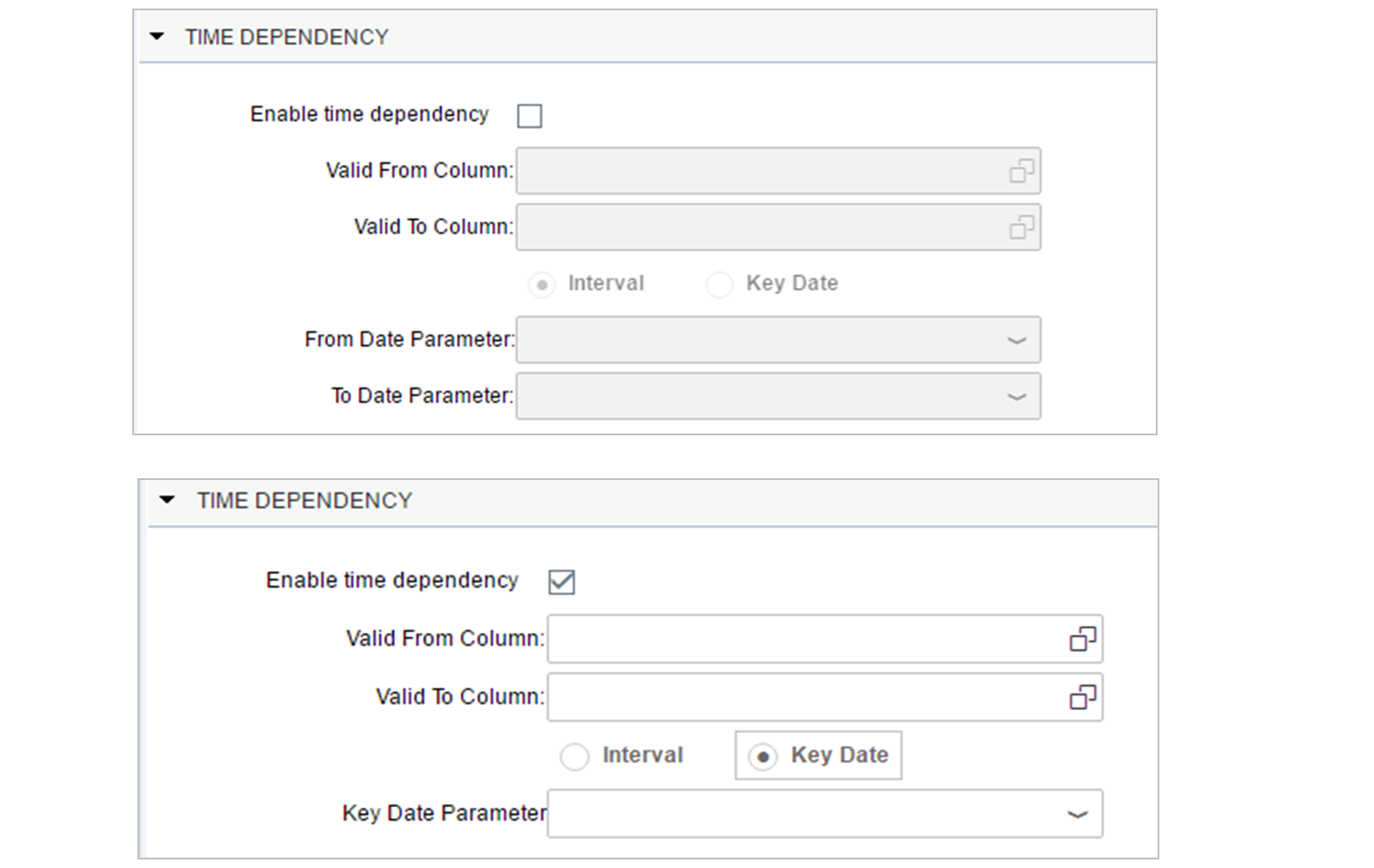 Your source data needs to contain definition columns consisting of a Valid From and a Valid To column.

When you define a hierarchy in an SAP HANA Cloud calculation view, whether it is a level or parent-child hierarchy, the hierarchy is materialized upon build/deployment by various tables and/or views in the HDI Container schema (column views or classic SQL views) or in other locations, especially the BIMC* tables and views in the _SYS_BI schema. These generated objects provide detailed hierarchy node relationship data to enable processing of the hierarchy when the front end tool is not able to generate the hierarchy relationships itself.

A key setting allows you to influence the way SAP HANA translates the defined hierarchy into technical tables and views in the database. This is the Hierarchy Type setting, which you can define in the Semantics of the Calculation View, in the View Properties → General tab.

The setting can take three values:

The table below summarizes which objects and references are generated based on the chosen option.

Name of a Calculation Views and its Associated SQL Hierarchy Views

Let's take an example to show how the various objects related to a Calculation View are named in the corresponding HDI Container schema.

Assume one level hierarchy, PROD_LEV_HIER, has been modeled within the Calculation View HC300::CVC_SALES_HIER.