The ALP allows an end user to quickly analyze the data and start focusing on the very records that need attention. It enables this in multiple ways:

The user can thus very easily ensure that the table in ALP shows only the records of interest. Furthermore, the user can easily select these records for further navigation (to Object Page or custom application page), or take some actions on selected records.

This video provides further insights into the key capabilities of ALP.

Summary of Key Capabilities of ALP

If applications want to bring in related information as KPIs, they can do one of the following:

Components of the ALP

The ALP has three main components:

Let's explore each of these components.

API is a default component for embedded analytics in S/4HANA. The key requirements are as follows: 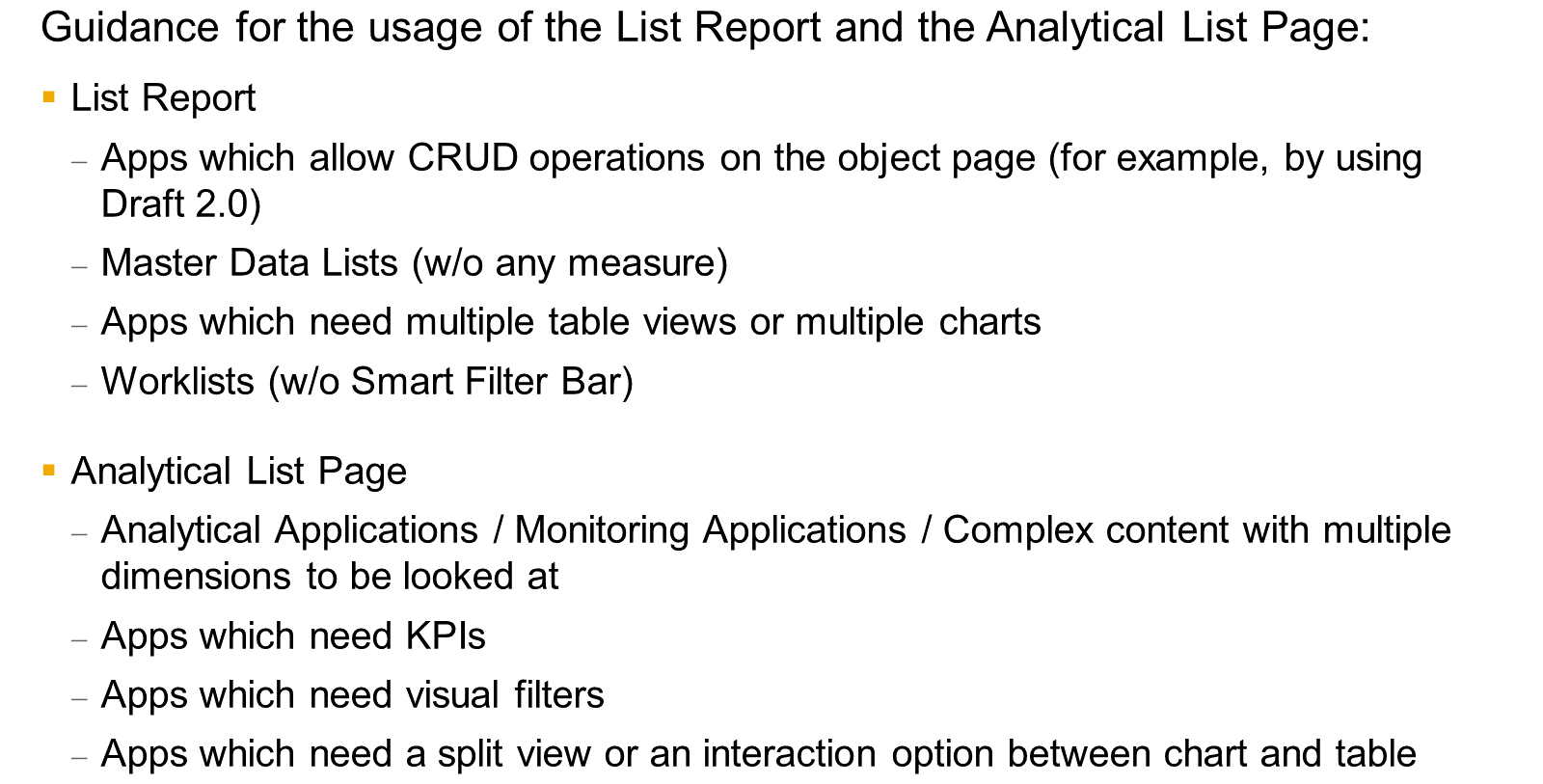 Time to check your understanding of when to use analytical list page!

As CDS query runs on Analytic Engine (in BW, it is called OLAP Engine), the data model should still align with traditional BW assumptions. CDS views just provide a faster, easier, more flexible way to build up such a data model.

It is similar for a transient query to run on the Analytic Engine in a non-BW system such as SAP S/4HANA. The lower part of the picture shows this. InfoProviders should be built by using CDS views, then CDS queries are built on top of it by using CDS views, but with different annotations.

CDS views are just a new tool to build the data model for Analytic Engine. The only difference is, with traditional tools like RSA1, Query Designer or Modeling Tool, the boundary of different objects are well defined in the tools. The tools guide end users to build a valid model. However, CDS views is much lighter tool with strong capability, by reducing the Extraction, Transformation, and Loading (ETL) effort, a data model can be built very conveniently by typing some CDS scripts. But, the boundary of the objects are blurred. The explicit restrictions defined in traditional BW tools become implicit rules for users to follow in order to build a valid model. Although there is no terms like 'InfoProvider' or 'Query' in the CDS transient objects world, nevertheless users still need to bear this picture in mind while modeling a business scenario. With the concept, you will understand where to define what.

How to Create an ALP Using SAP BAS

After your analytical model is implemented on the SAP S/4HANA system, follow these steps to create an ALP using the SAP BAS:

This video explains the steps to create an ALP using the SAP BAS.

Manifest Settings for ALP Based Application

Check https://sapui5.hana.ondemand.com/#/topic/2a9df06673d34f72b238549d49da8bfb for full list of manifest entries and what are the different values that they can take. 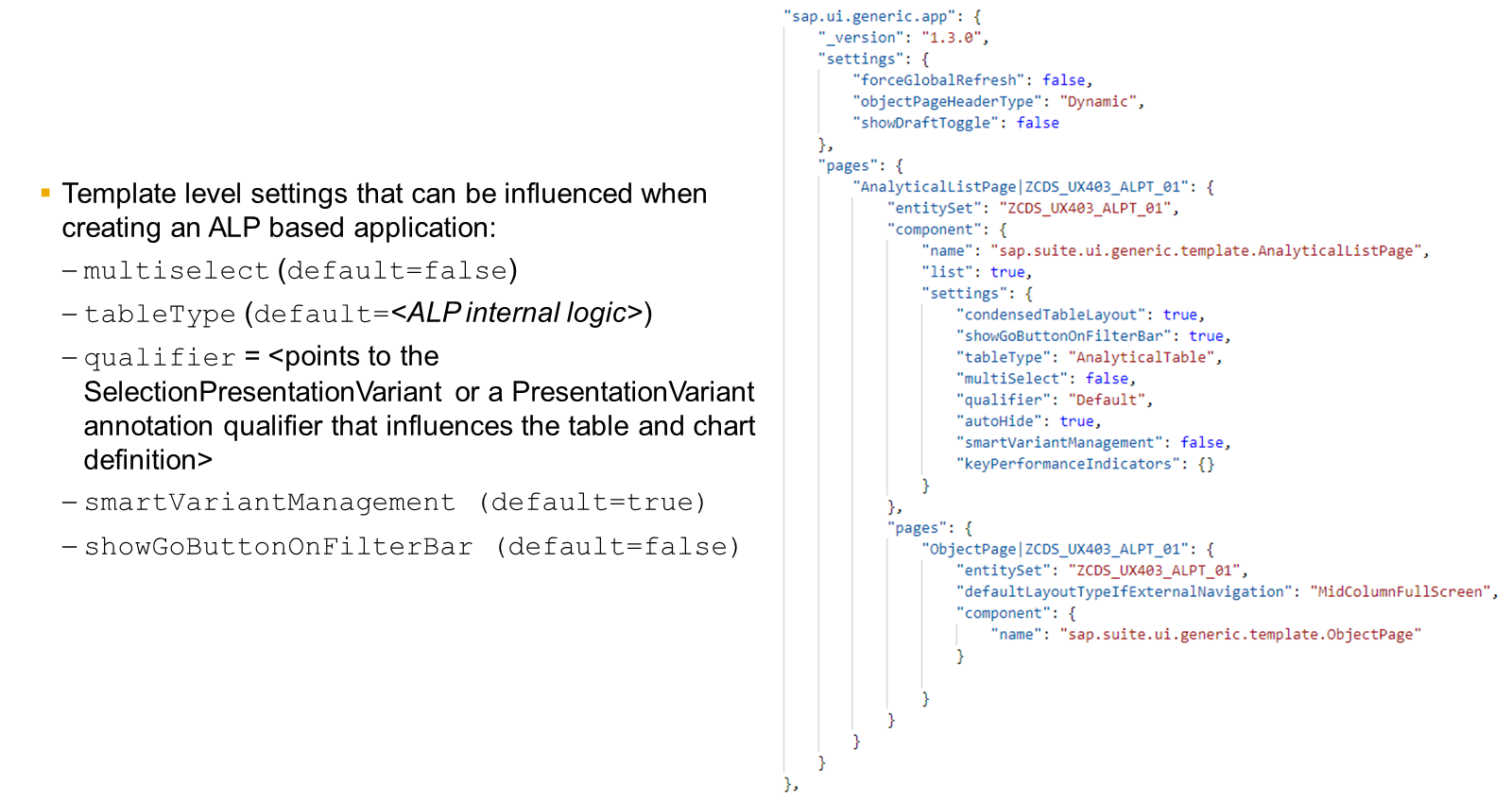 The figure displays the template level settings that can be influenced when creating an ALP based application.

A visual filter is an intuitive way of choosing filter values from an associated measure value. It supports line, bar, and donut chart types. Visual filter fields are always a subset of compact filters. 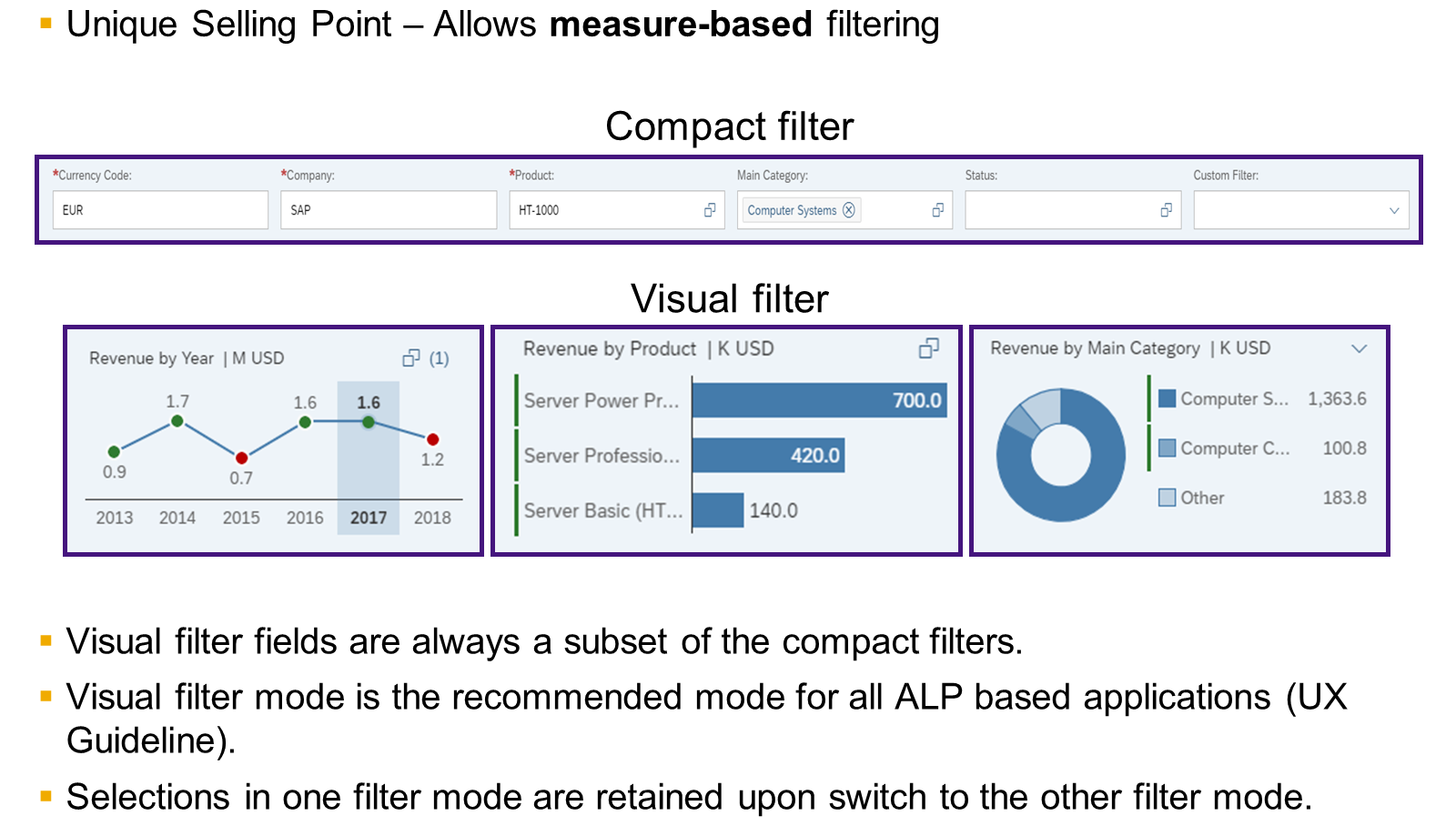 Use a visual filter to combine measures or item counts with filter values. Chart visualization increases the joy of use and the faster perception of relevant data. Selecting one or several chart data points allows quick analysis of the data set.

For example, to choose the country with the highest sales, you can visualize the graphic and make a selection on it. The default view of a visual filter bar is based on the filter fields defined in the SelectionFields annotation for which a visual filter is defined.

Compact filters dialog lists all the fields in the entity sets which are marked with "sap:filterable"=true. For this field to be rendered as a visual filter, we need in addition to this, the visual filter annotations (a valuelist annotation enhanced with PresentationVariantQualifier).

The user might expect that only the products which contains PRO within it are considered for bringing up the visual filter but this is not the case. And it is so by design. The visual filter is meant to show the top 3 products irrespective of the value for the same field in the compact filter. Nevertheless, the complex condition is seen when one clicks on the (1) in the top right of the visual filter and is correctly carried forward to the content area. 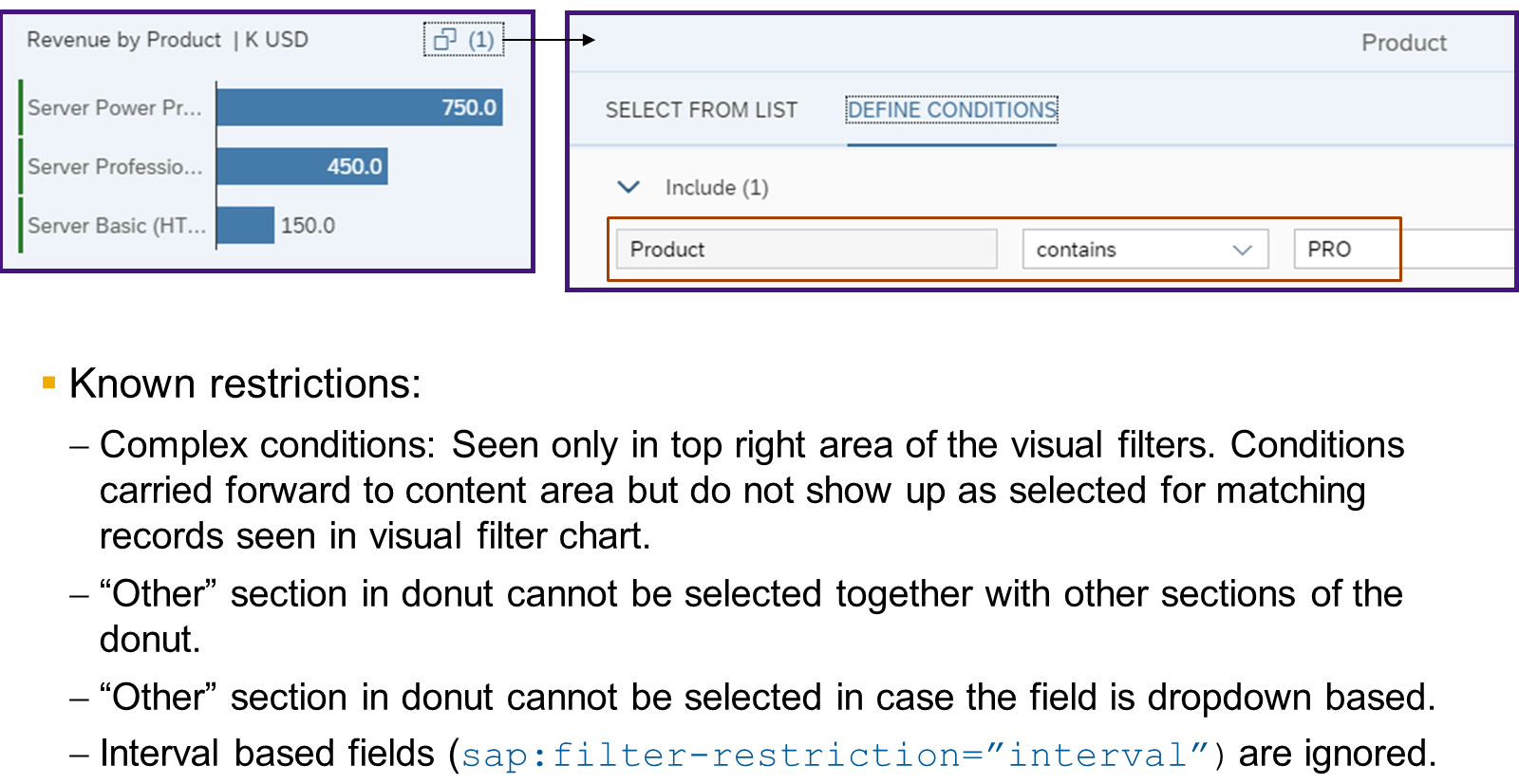 In the example shown in the figure the first two records have PRO within their description and the user might expect that they are shown as highlighted. But at the moment this does not happen. Again, the complex condition that was applied is correctly carried forward to the content area. However currently we do not yet highlight the chart selections based on a complex condition coming via the compact filters.

The ALP ignores the UI.Hidden fields when you select filters if the IN mapping points to a field marked with UI.Hidden in the valuelist entity set. For example, the Status_ID from the main entity set points to StatusCodein the value help entity set (of the visual filter). If the StatusCodeis marked as UI.Hidden, then the incoming value is ignored (https://sapui5.hana.ondemand.com/#/topic/16d43eb0472c4d5a9439ca1bf92c915d).

The key characteristics of visual filters are as follows:

How to Create a Visual Filter

The following steps show you how to create a visual filter.

Visual filters support semantic coloring. Semantic coloring is based on the defined Criticality in DataPoint annotations. The specified value, or the value returned from a path, determines the color.

Both UI.Criticality and UI.CriticalityCalculation annotations are supported. The first one allows applications to have their own backend logic to calculate the semantic color for a given data point value.

The second one allows applications to specify either fixed or dynamic values using which the ALP framework would apply semantic color on the chart data points (https://sapui5.hana.ondemand.com/#/topic/1714720cae984ad8b9d9111937e7cd38).

The following figure shows an example definition for a value help for a visual filter. 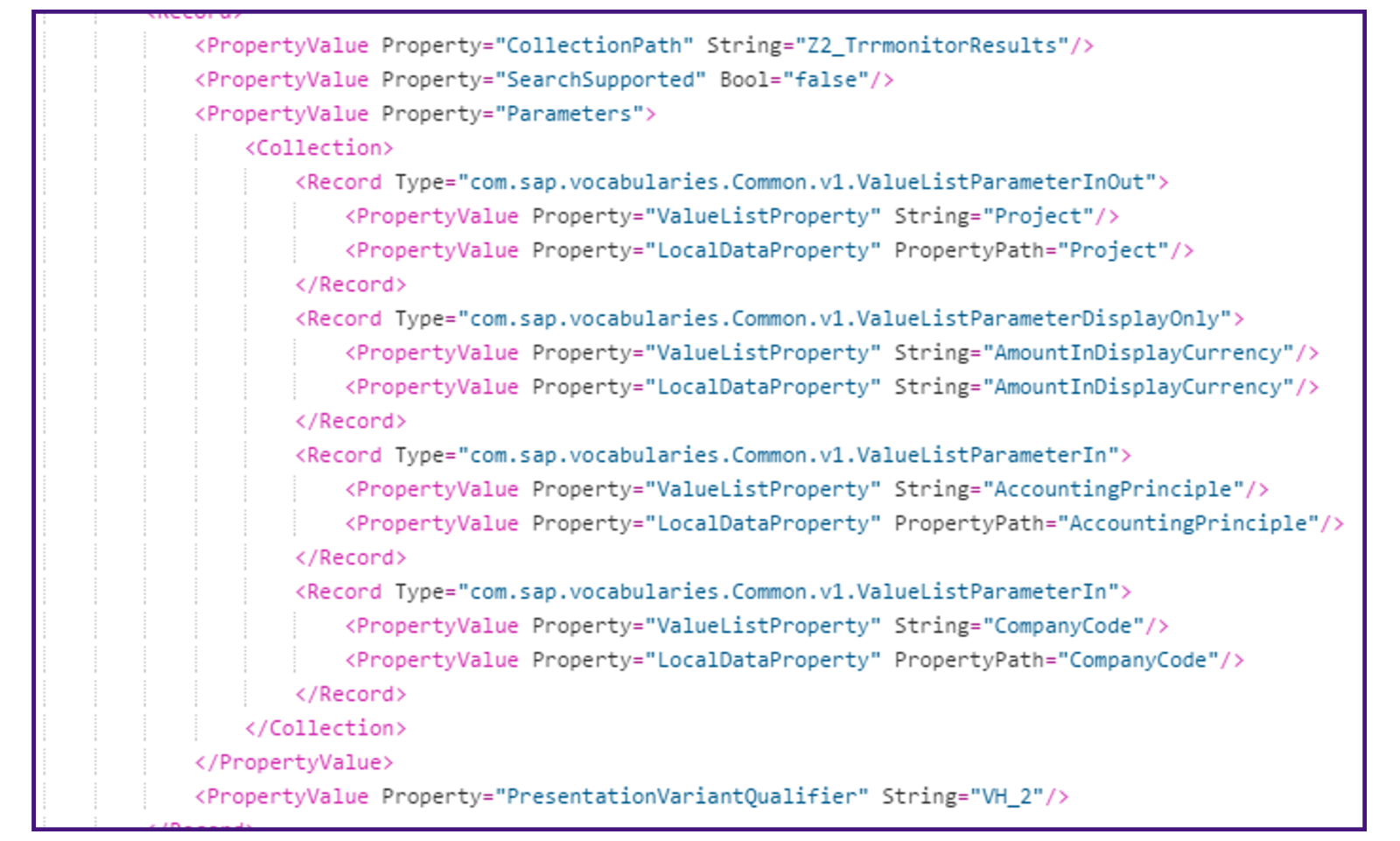 FLP default values are applied only in non-navigation context, for example, if you launch an ALP app directly from an FLP tile, there is no xapp-state navigation involved.