Basics and Syntax of Joins

Definition of a Join

Sometimes it is necessary to combine two SQL data sources into one result set, consisting of columns of both data sources. This is called a join.

As an example, when reading flight connections, it can be necessary to read details on the flight carrier, too, for example, the name of the carrier.

We will discuss the different results of these join types soon. But let's have a look at the ABAP SQL syntax of joins, first.

In the join conditions as well as in the field list, WHERE clause, and so on, the columns of data sources are fully identified by the name of the data source and the column name, separated by the tilde sign ( ~ ).

Note
From other SQL dialects, you may be used to the period or full stop sign ( . ). This had to be replaced by another sign in ABAP SQL, because the period sign already has the meaning of ending the statement.

On the other hand, both tables contain a column CARRIER_ID. Therefore, for this field /DMO/CARRIER~ or /DMO/CONNECTION~ is mandatory.

If a data source has an alias, it is mandatory to use the alias instead of the original data source name.

In some situations, aliases for data sources are more than just a syntax alternative. They become indispensable in statements that contain the same data source more than once. 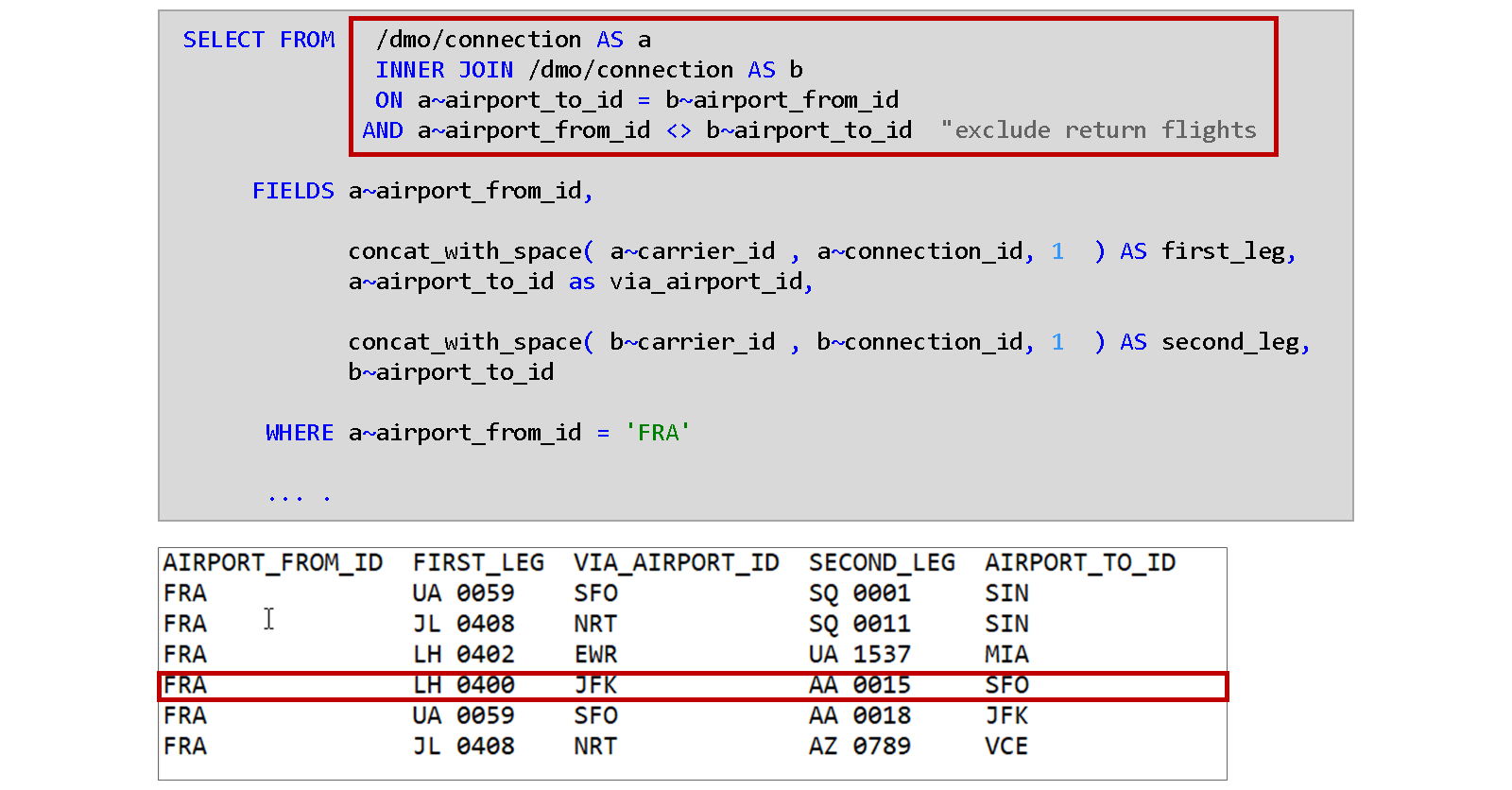 Let's have a look at an example. Let's consider we have a table with flight connections (DMO/CONNECTION). We are interested in destinations that we can reach starting from Frankfurt International Airport (FRA). But instead of direct flights, we are looking for flights with one transfer.

The highlighted row in the result is a connection with LH 400 from Frankfurt (FRA) to New York (JFK) and from there with AA 0015 to San Francisco (SFO).

It is quite obvious that such a self-join would not work without the alias names a for the left usage of (DMO/CONNECTION and b for the right usage of /DMO/CONNECTION. Without the different aliases, it would not be possible to distinguish between the first connection and the second connection - neither in the join condition nor in the field list or WHERE clause.

Note
In this kind of self-join, the alias name is required in front of each column name because every column name exists in both data sources.

Try It Out: Syntax of Joins

Let's look at the differences between inner joins and outer joins.

This example illustrates the result of a left outer join. The two rows highlighted in the result set would not be there in an inner join. They correspond to carriers that do not have flight connections in database table /DMO/CONNECTION.

Note
The type of column CONNECTION_ID is based on ABAP built-in type N. The initial value for this type is not a series of blanks but a series of zeroes.

Try It Out: Inner Join and Outer Joins

In ABAP SQL, you can join more than two data sources at the same time. Let's begin with the join of two data sources, namely the join flight carriers and flight connections that we discussed earlier. 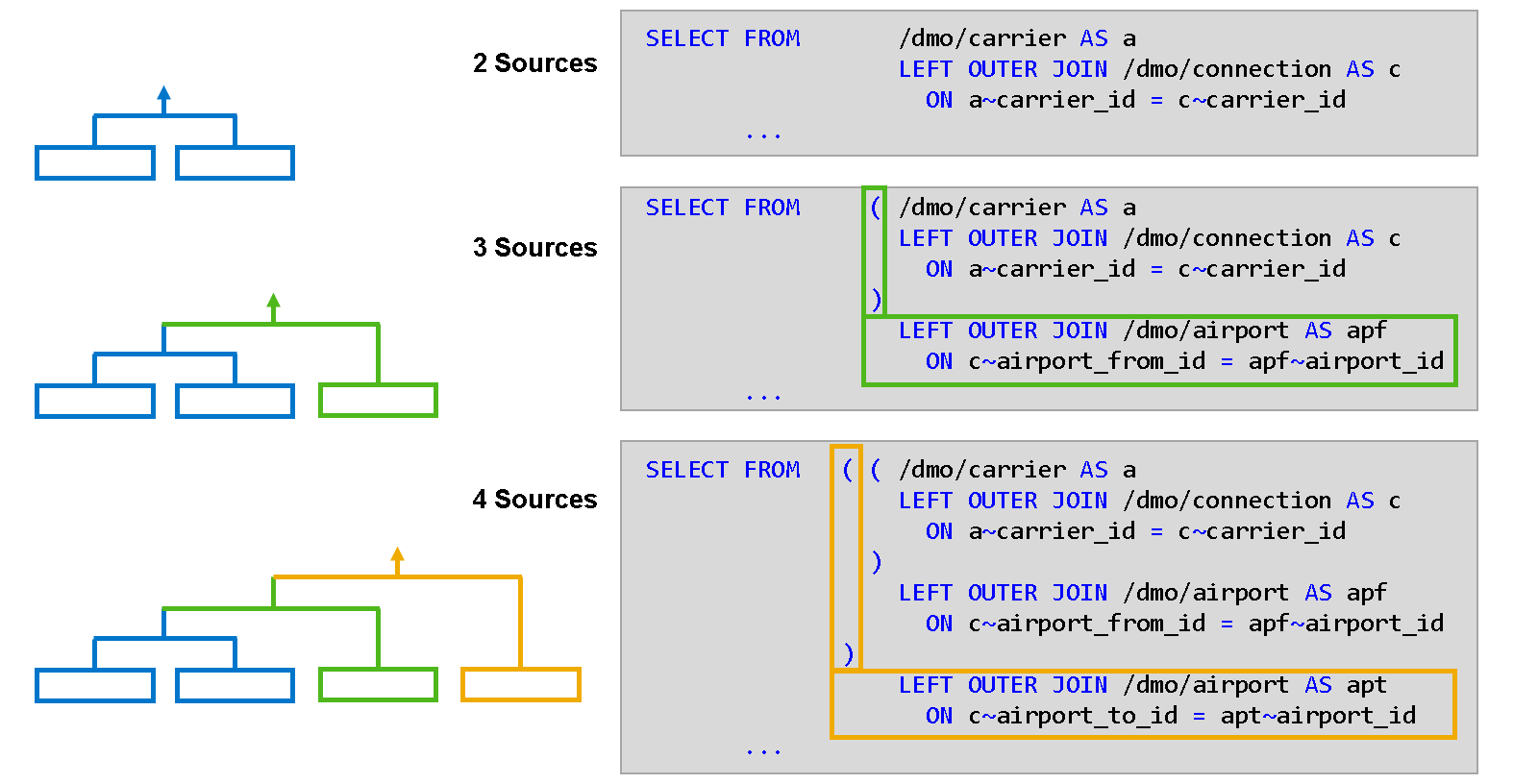 Now let's consider we want to add database table /DMO/AIRPORT to read the name and city of the departure airport (AIRPORT_FROM_ID).

To join the three data sources, we first surround the existing join with a pair of brackets. This first join now serves as left data source for the next join. We add the join keyword (INNER JOIN, LEFT OUTER JOIN, RIGHT OUTER JOIN), the right data source (/DMO/AIRPORT), an alias (AS apf), and the join condition for the additional join (ON c~airport_from_id = apf~airport_id).

Now let's consider we want to add database table /DMO/AIRPORT once again to also read the name and city of the destination airport (AIRPORT_TO_ID).

Note
You can repeat this until you reach the maximum number of data sources that can be linked to each other. Currently, up to 50 data sources (49 joins) are allowed in one SELECT statement. 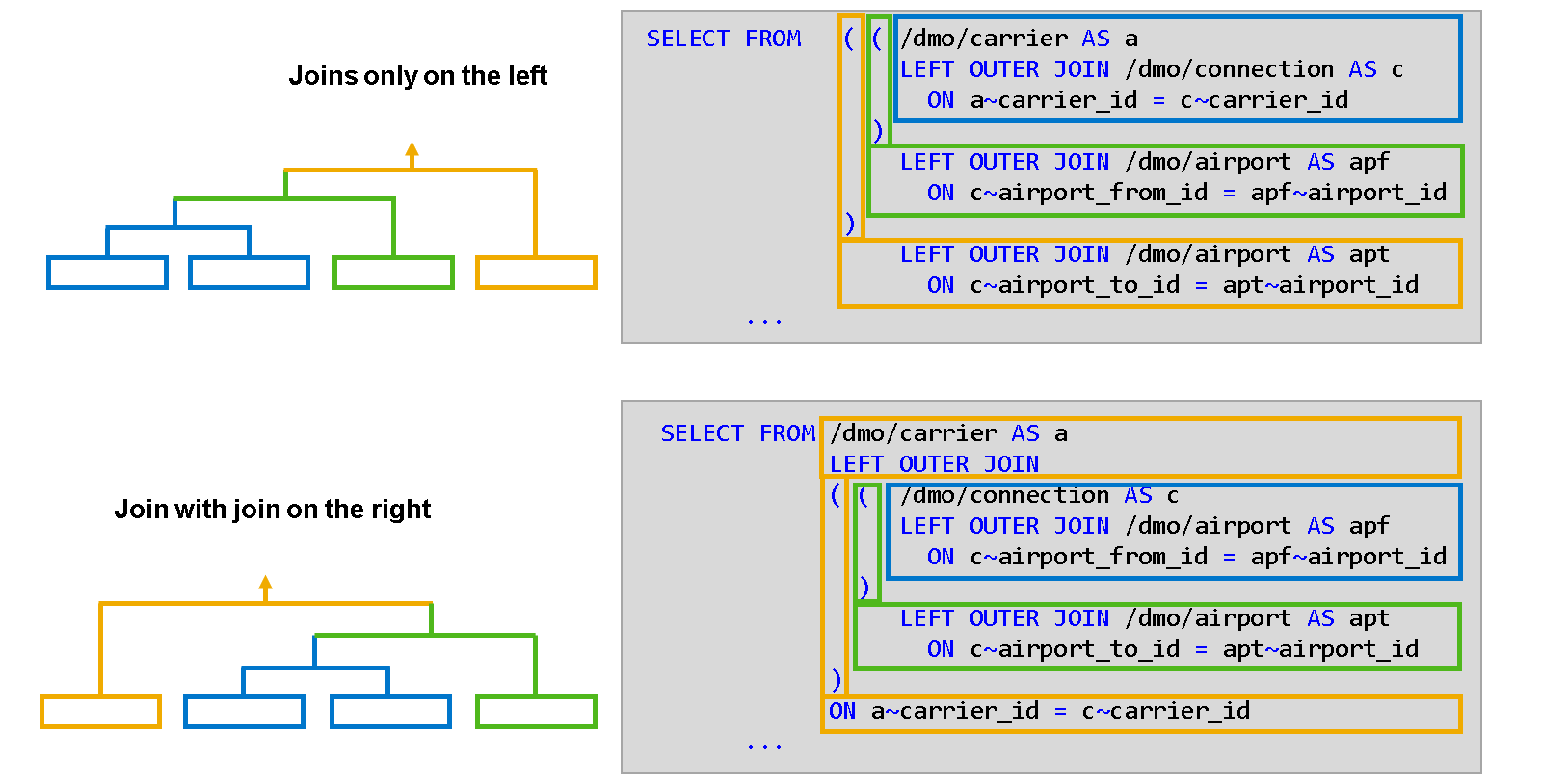 Thanks to the brackets, it is also possible to use a join as the right data source of another join. In the lower example, we start with a join of /DMO/CONNECTION and /DMO/AIRPORT (AS apf). We surround it with brackets and use it as left data source of a join with /DMO/AIRPORT (AS apt). To add /DMO/AIRLINE, we surround the existing join with another pair of brackets. Then we add the left data source (/DMO/CARRIER) and the join keyword before the opening bracket and the ON-condition after the closing bracket.

Note
In our example, the two results are identical. But there are situations where the result can depend on the sequence in which the database evaluates the joins.

The Importance of Brackets

From a syntax point of view, the brackets are not necessary. But for the sake of readability, it is strongly recommended not to omit the brackets in nested joins. This should be illustrated by the following example.

The SELECT statement contains a join of four database tables but does not use any brackets. At a superficial glance, one could think that the join of /DMO/CARRIER and /DMO/CONNECTION is evaluated first because these tables are the first to appear in the FROM clause.

But this conclusion is wrong!

Hint
Always use brackets in nested joins to avoid this kind of confusion.