Different tools are available for creating, editing, and displaying ABAP Repository Objects in ADT. Some of these tools are native to Eclipse but some objects must be displayed and edited in the SAP GUI.

ADT's keyword completion feature allows you to reduce the time spent on pure code editing by proposing valid ABAP keywords and identifiers that may be inserted at any given position within the source code. To use keyword completion, you simply begin typing the first few characters of a keyword or identifier - suggestions appear automatically.

If the initial suggestion is correct, simply choose the TAB key to accept it. To see more options, choose Ctrl + Space on your keyboard, and then choose the desired ABAP keyword or identifier from the list of suggested entries. Note that keyword completion can be turned off in Preferences, but it is enabled by default.

The keyboard shortcut, Ctrl + Space, is not used solely for keyword completion. You can also use it to access code completion suggestions for the following:

When you choose Ctrl + Space, a full list of objects matching what you have already typed appears. As you continue to type, the list is narrowed down. To insert the name of a variable, function module, or method into your code, select the entry and choose Enter or double-click the name. For function modules and methods, you will often want to insert not just the name but also the full interface or signature. To do this, highlight the function module or method and choose Shift + Enter (on your keyboard).

There are two basic functions that all developers will need to use when developing ABAP applications. The first is syntax checking and the second is object activation.

The keyboard commands used to perform these basic functions are exactly the same as those of the SAP GUI-based editors (CTRL + F2 for syntax check, and CTRL + F3 for activation). However, the buttons have slightly different icons.

ABAP code templates are structured descriptions of coding patterns that can be used in ABAP source code. Their use allows developers to reduce the time they spend on routine editing activities and to improve consistency.

ABAP code templates go beyond the functionality of simple code snippets. They are integrated with ADT's code completion feature and they can use both predefined and custom variables. ADT contains a number of predefined code templates, but you can easily create your own, either by editing an existing template or by starting from scratch. Templates can be inserted into the ABAP source code editor using the same keyboard command - Ctrl + Space - that is used for keyword and code completion.

While there are a number of standard variables that can be used - as listed in the table below - the main advantage of code templates is that you can define your own placeholders. When you insert the template in your code, you provide values to replace the placeholders. If a placeholder is used more than once, the value replaces all its occurrences. This helps to avoid typing errors or errors caused by forgetting to re-name a particular variable at a particular position in a block of code.

ADT's standard variables are shown in the following table:

You can also drag and drop code templates into your code from the Templates view. 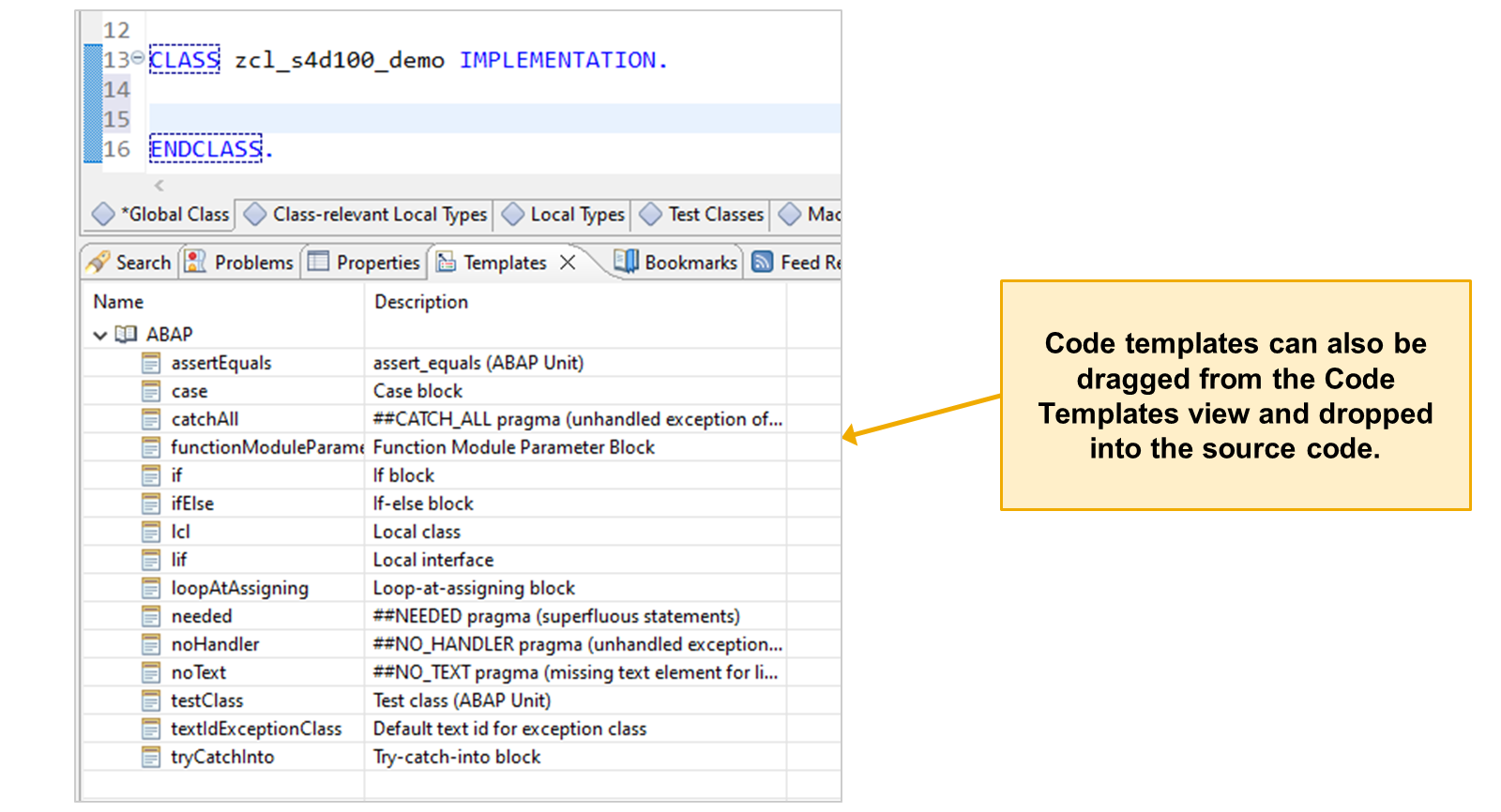 To create a placeholder within a template, use the dollar sign followed by the name of the placeholder enclosed in braces. Note that the editor for code templates does not provide a syntax check.