Play the video to get some background information on the research by McKinsey.

Premortem Analysis with the Project Team

In his 2004 book, The Power of Intuition, Gary Klein devised a "premortem analysis" procedure to help teams develop the ability to quickly adapt to changing situations as exceptions over the course of a project. The idea came from a study conducted at the University of Colorado that found prospective hindsight, where you imagine an event has already occurred, can increase a person's ability to correctly identify reasons for future outcomes by up to 30 percent.

A premortem comes at the beginning of a project, so the team can anticipate potential issues that could happen and develop resolutions in advance. If and when any of those problems occur during the project, the team can quickly and easily implement the resolution previously identified.

This is how Gary Klein describes the procedure:

"Start by assuming [your] undertaking has failed spectacularly. Then, over the next few minutes, write down every reason you can think of for the failure […]. Then, revisit your plans in light of the pitfalls you've uncovered, and generate ideas as to how you can minimize their likelihood of occurring or avoid them altogether. Klein also recommends that you periodically review your premortem list as you make progress."

To support a successful SAP S/4HANA Cloud implementation, SAP provides organizational change management guidance and templates in the Solution Adoption workstream of the SAP Activate Methodology to do the following:

Play the video to learn how to identify the key stakeholders for successful project implementation.

There are many benefits to a public cloud solution, including:

To make an SAP S/4HANA Cloud implementation successful, we need to move away from the traditional "Fit-Gap" on-premise mindset to the Fit-to-Standard Cloud mindset.

Note
A "Gap" is a difference between what the system DOES and what the customer NEEDS it to do.

How to handle gaps with the Fit-to-Standard Mindset:

The purpose of the Change Impact Analysis Process is to identify the impact of changes associated with the implementation project on the organization. This enables you to develop a change management plan to meet the requirements of stakeholders and support a smooth transition to the new system. To get a visual "heat map" overview of the varying degrees of impact different areas of the business will experience, use the SAP S/4HANA Cloud Change Impact Analysis.xlsx accelerator.

Assessing all types of change impact:

The goal of the learning needs analysis is to ensure the right learning is readily available at the time of need. The focus is on intuitive, consumer focused content, activities and deployment methods that are directly relevant to the learner's daily life. The change impact of the new solution is important in understanding the enablement needs of all stakeholders in the organization. All training resources should be evaluated, including SAP enablement content, and documentation customers have for processes in the legacy system.

For additional information, review these deliverables in the SAP Roadmap Viewer:

Through the SAP Enable Now content tool, SAP has developed many predelivered tutorials for standard business processes and made them available in the Web Assistant in SAP S/4HANA. End-users can access enablement and support any time by selecting the question mark icon in the top right corner of the launchpad. Delivering training content within the SAP S/4HANA applications provides support to end-users when they need it, in-context of the current task. Easily accessible enablement improves user adoption of a solution and increases productivity, as it takes less time to get employees up-to-speed on the new solution. If a customer has best practices in their system that have not been customized, there may be a predelivered tutorial that can be used at no additional cost. To create your own custom tutorials or download the standard tutorial packages and edit, a license to SAP Enable Now is required.

Click through the tutorial below to get an experience of an SAP Enable Now tutorial, while also learning how to access embedded help in SAP S/4HANA Cloud.

With a license to SAP Enable Now, you can create, maintain and deliver effective training and enablement assets where learners can easily find them. Create content once, and reuse it across multiple learning scenarios, and provide contextual knowledge and guidance by embedding tutorials directly in an application. You can also add videos, animations, or detailed and interactive software simulations easily with the Enable Now Producer. SAP Enable Now is supported for both on-premise and cloud deployments. 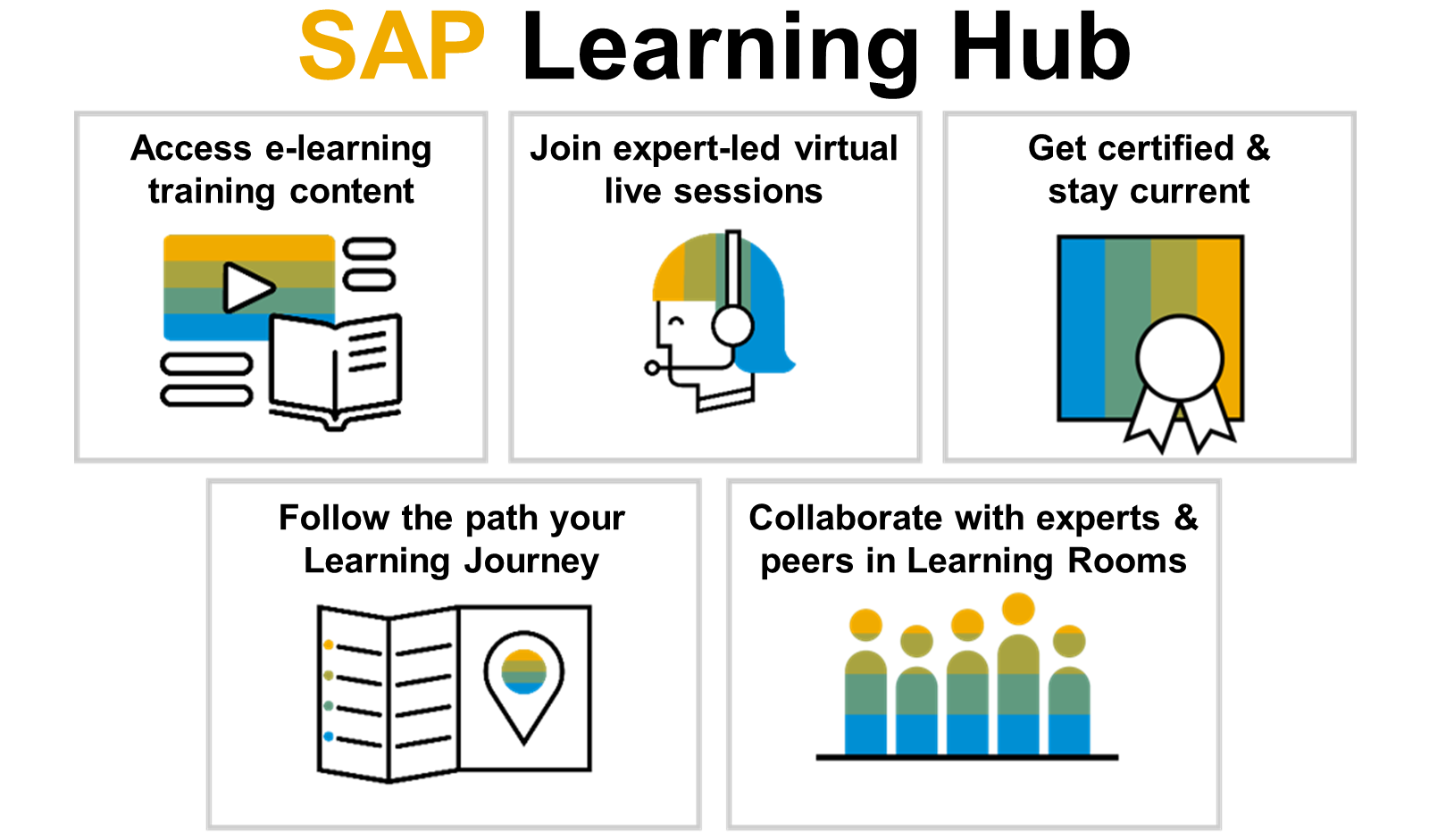 Check which SAP Learning Hub edition(s) you have with the following steps:

For technical issues with SAP Learning Hub or SAP Learning Rooms, submit a ticket in the User Support Center.