SAP Central Business Configuration enables you to manage your configurations for SAP cloud implementations and ongoing operations centrally via the Project Experience.

The guided workflow process steps include:

SAP Central Business Configuration is used to continuously maintain SAP S/4HANA Cloud after go-live. For example, if a new business process is released, a customer will start at the beginning of the workflow to first select the scope to activate, make any changes or additions to the organizational structure (if necessary), complete the relevant configuration activities, and finally maintain any necessary production system settings. The workflow ensures all required steps are completed for new scope to be successfully activated.

User assistance is accessed through the question mark icon in the top right corner of the SAP Central Business Configuration system. You will find:

SAP Cloud ALM is used by implementation consultants and customers to manage the implementation of SAP S/4HANA Cloud and maintain the system after go-live. The implementation tasks are populated from the SAP Activate Roadmap tasks for SAP S/4HANA Cloud. An integration can be set up between SAP Cloud ALM and SAP Central Business Configuration to allow you to navigate directly to the SAP Central Business Configuration in relevant tasks, and to monitor the system as part of the larger integrated landscape after go-live with the SAP Cloud ALM for Operations functionalities. 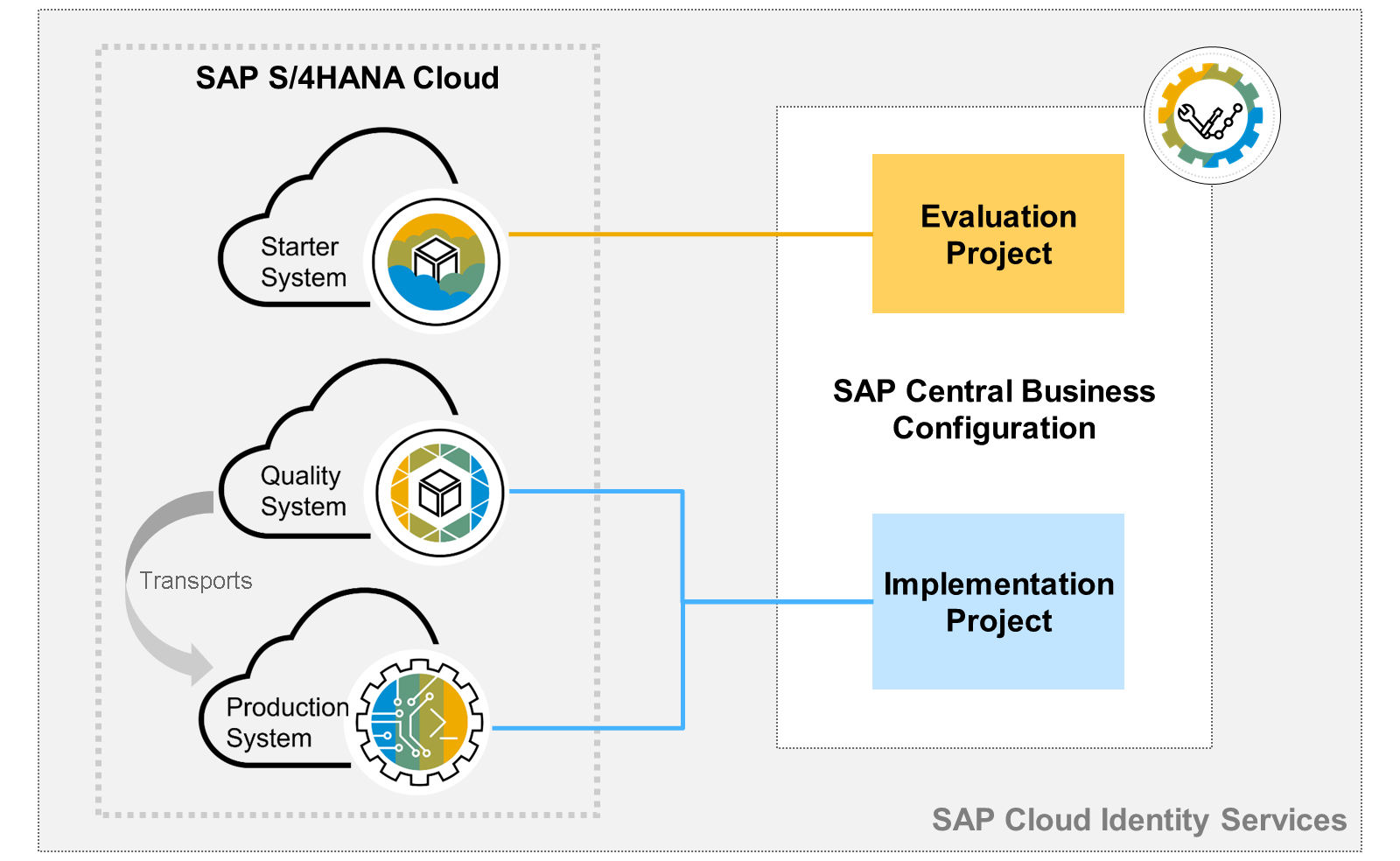 All SAP S/4HANA Cloud systems used for implementation activities (Starter, Quality, Production) are provisioned through SAP Central Business Configuration. Within SAP Central Business Configuration, two projects separate the systems. The first project you create is the Evaluation Project. You activate content in the Starter System from within the Evaluation Project. You create a second project called the Implementation Project to provision and configure the Quality and Production systems.

There are two primary types of projects used by customers and partners in SAP Central Business Configuration:

Note
Please refer to the User Onboarding for SAP S/4HANA Cloud guide for step-by-step activities to complete after the customer IT contact receives the starter system login credentials.

Note
You can create an unlimited number of projects, regardless of the project type.

When a customer purchases SAP S/4HANA Cloud, the sales order triggers the tenant setup request. The person that signed the contract to purchase the solution (often the CIO) is typically assigned the IT Contact role by SAP.

The IT Contact is responsible for setting up the partner and customer project team members in SAP Central Business Configuration. 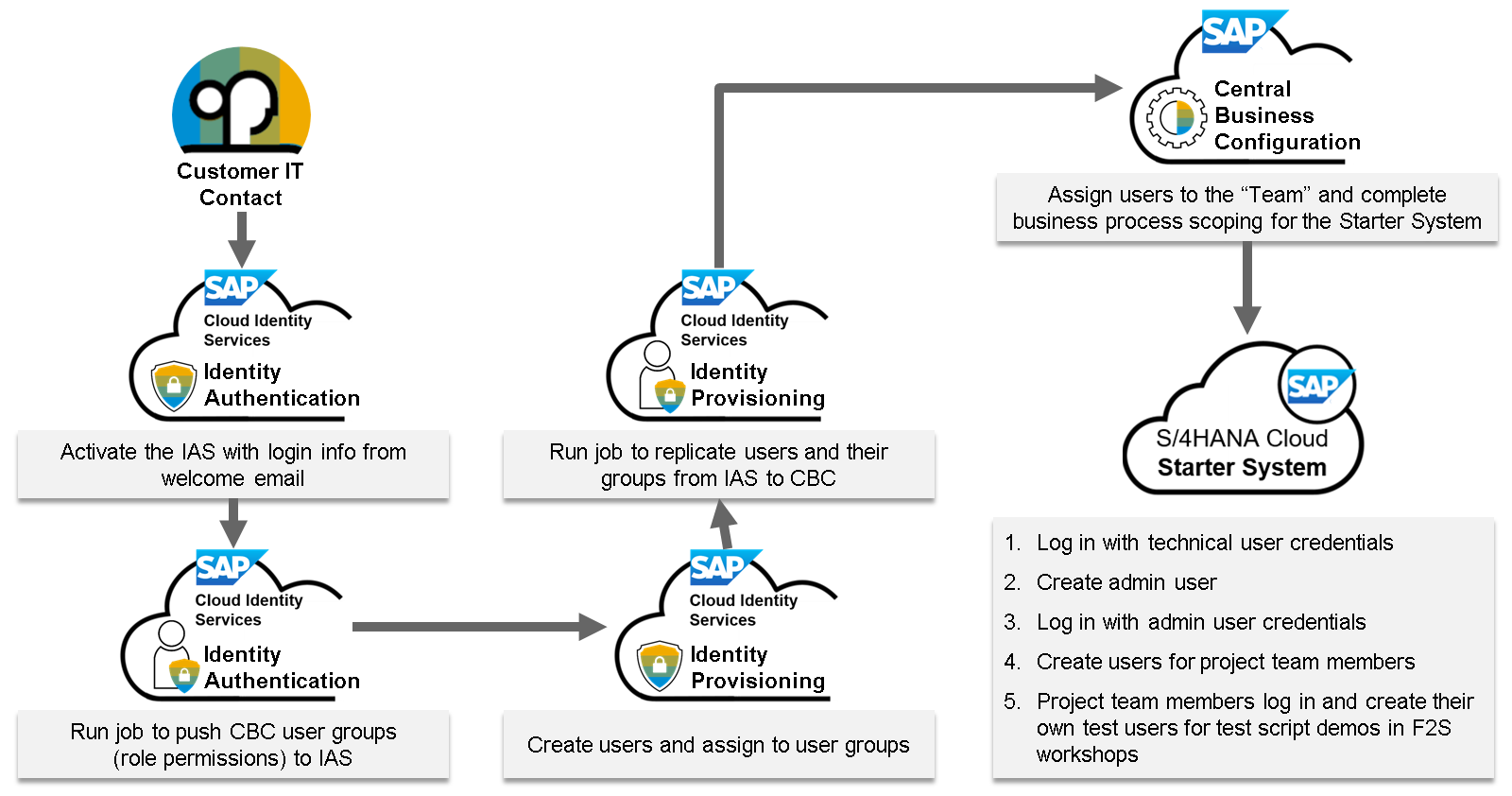 In the Quality and Production systems, you will set up an integration with the customer's HR system of record. When the integration is active, you will no longer create users manually, as a user created through the file-upload method in SAP S/4HANA Cloud would simply be overwritten at the next replication job from the HR system.

Recommendations for using the Starter System

Do not set up all customer-required configuration settings in the starter system, because your target system will be set up later in the implementation project. You can customize and edit some business content in the starter system, but you cannot delete any entities in the organizational structure or change the core finance settings.

When completing scoping in the starter system for the first time, select only one country/region and use the default settings provided by SAP to get the base system set up. If you want to add additional countries/regions, scope, organizational elements, or configuration settings afterwards, you can initiate a change and perform the required enhancements or changes.

Project activities and milestones are executed in a specific sequence in every phase of project. Any change that belongs to a preceding phase can be done by using the Initiate Change functionality, which will set back the project to the respective phase.

For example, you can initiate changes to Scope and Country and Org Management which belong to the Scope and Organizational Structure phase while you are already in a later phase (such as Product-Specific Configuration phase). The project activities of the previous phase are unlocked and are then sequentially executed moving forward to ensure you complete all required configurations based on the new scope/country/region activation. You must complete the same sequence of phases and tasks per phase because some business scenarios require organizational structure changes and/or will have corresponding configuration activities where data must be entered.

SAP Central Business Configuration is designed to provide guidance for your implementation project by controlling the sequence of activities that are completed. In the Project Experience, you can manage your team members, complete activities to set up and configure your systems, and view the project status. Activities are grouped into phases, and each phase ends with a milestone.

The Project Status lets you know the current state of your project and can give an indication of what activities are occurring in the backend. Project Statuses can be:

Note
Try it out:Navigate the Project Experience and interact with the user interface in SAP Central Business Configuration

On the initial login to SAP Central Business Configuration, each user will be presented with a one-time popup window, requesting users to click 'proceed' in order to acknowledge they have read and understood the provided information and hyperlinked privacy statement. Without clicking 'proceed', access to SAP Central Business Configuration will not be possible. Please refer to the popup message and the hyperlinked privacy statement for details.

Note
In order to click 'proceed', no certification is required by the user.

You can easily switch between projects and create additional projects. You can also move to an earlier phase by using the Initiate Change functionality. This allows you to unlock activities for an earlier phase and then sequentially move forward through the required activities. For example, after a customer goes live with SAP S/4HANA Cloud, a new business scenario (scope item) may be released in an upgrade they want to activate. The customer would use the Initiate Change functionality in SAP Central Business Configuration to move back to the Scope phase to activate the new scenario, then continue through the Organizational Structure phase (some scenarios may require additional organizational entities), the Product-Specific Configuration phase to complete any necessary configuration for the scenario, and finally, the Production System Settings phase.

Note
Try it out: Perform evaluation project activities and create the implementation project

The Teams tab provides an overview of project team members and their specific project roles. Some activities, like scoping, can only be processed by one user at a time. This ensures the data is consistent. Other activities, such as defining the organizational structure and configuration of business scenarios (scope items) allow multiple users to work at the same time. 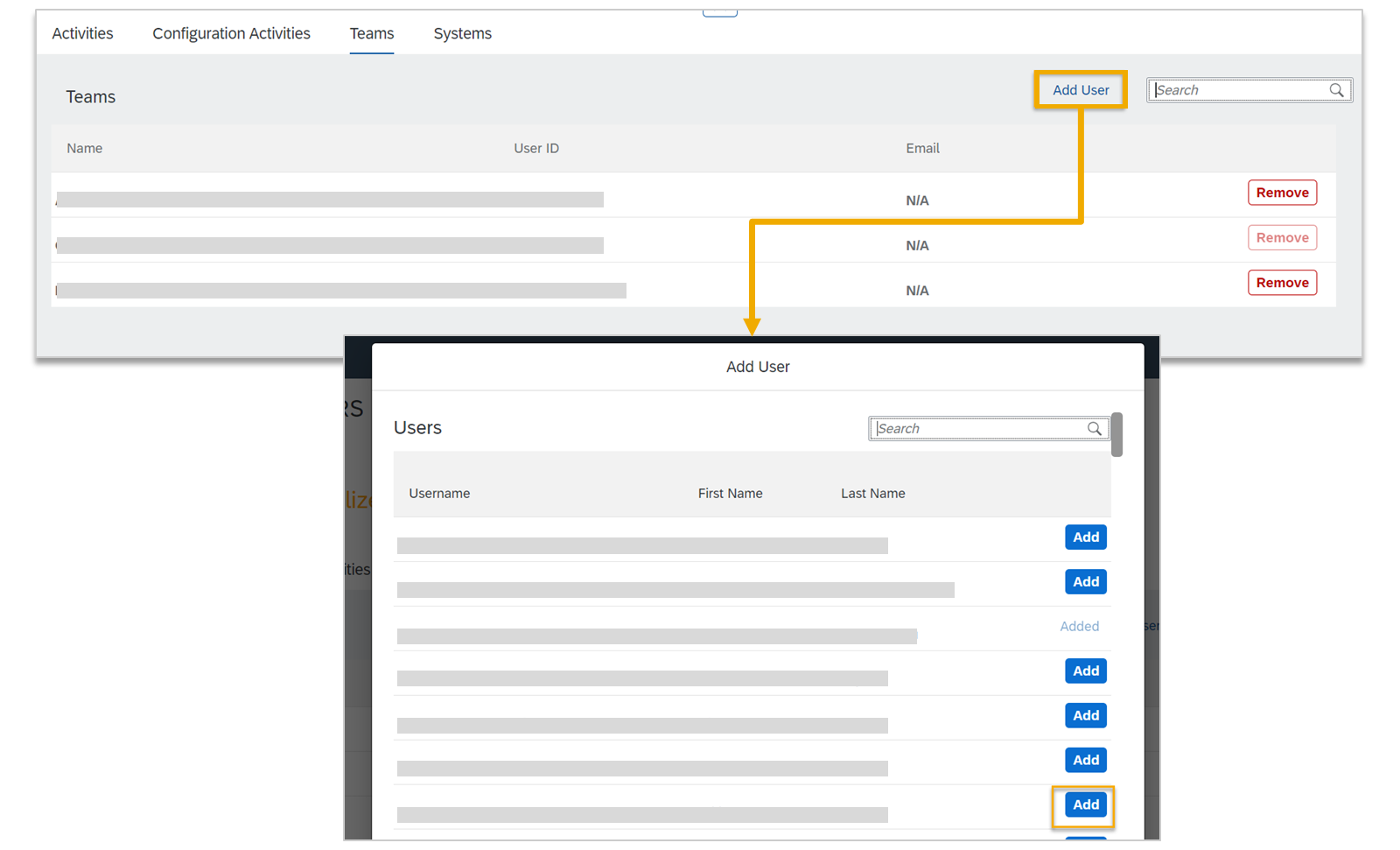 The Systems tab provides an overview of your systems and their provisioning statuses after scoping is complete. It allows you to request system provisioning, and you have the capability to release configuration settings to the productive environment.

The Logs page provides detailed information on the changes performed in Project Experience. For audit purposes, it's important to have tracking and logging history in place that captures changes in project activities with the time, name, fields changed, and area.

In SAP Central Business Configuration, you start scoping in the Project Experience area with the Define Scope project activity. You begin scoping by providing basic information about your company, such as the countries/regions and industry you operate in. The tool will propose relevant bundles and scenarios with predefined content. You can then further adjust the business scenarios in your solution. Built-in rules ensure that your selected content is logical and consistent from a technical and business point of view.

With SAP Central Business Configuration, customers are able to scope:

You first select a bundle that includes many scenarios (scope items) grouped into a package. Additional scenarios can be added after selecting a bundle. License-dependent and non-standard scenarios show a "lock" icon because they need to be requested. Within a bundle or scenario, you can choose which country/region to activate the scenario in. The documentation of each scenario provides a link to SAP Best Practices Explorer for additional information.

You must choose a group ledger scenario when defining the initial scope. The two choices are:

My Selected Scope provides an overview of all business scenarios (scope items) you have chosen. You have the ability to filter scenarios by country/region.

Note
Try it out: Define the scope

You must request license-dependent scenarios from the SAP Service Center by creating a case. Selecting the Open button in this activity brings you to SAP Best Practices Explorer to find the relevant app IDs and scope item information.

This activity requires you to assign a deployment target for your system. The deployment target is created and maintained in the backend by SAP, but in the Project Experience, a consultant or customer still needs to assign the target. The assigned deployment target automatically sets up the corresponding technical business options in scope for the project.

Note
Once a deployment target is assigned, it cannot be decoupled from the assigned system.

Note
Try it out: Assign the deployment target

Relevant configuration activities are identified based on the scoping selection.

Note
The fiscal year variant and group currency are applied to the entire system and cannot be changed after confirmation. 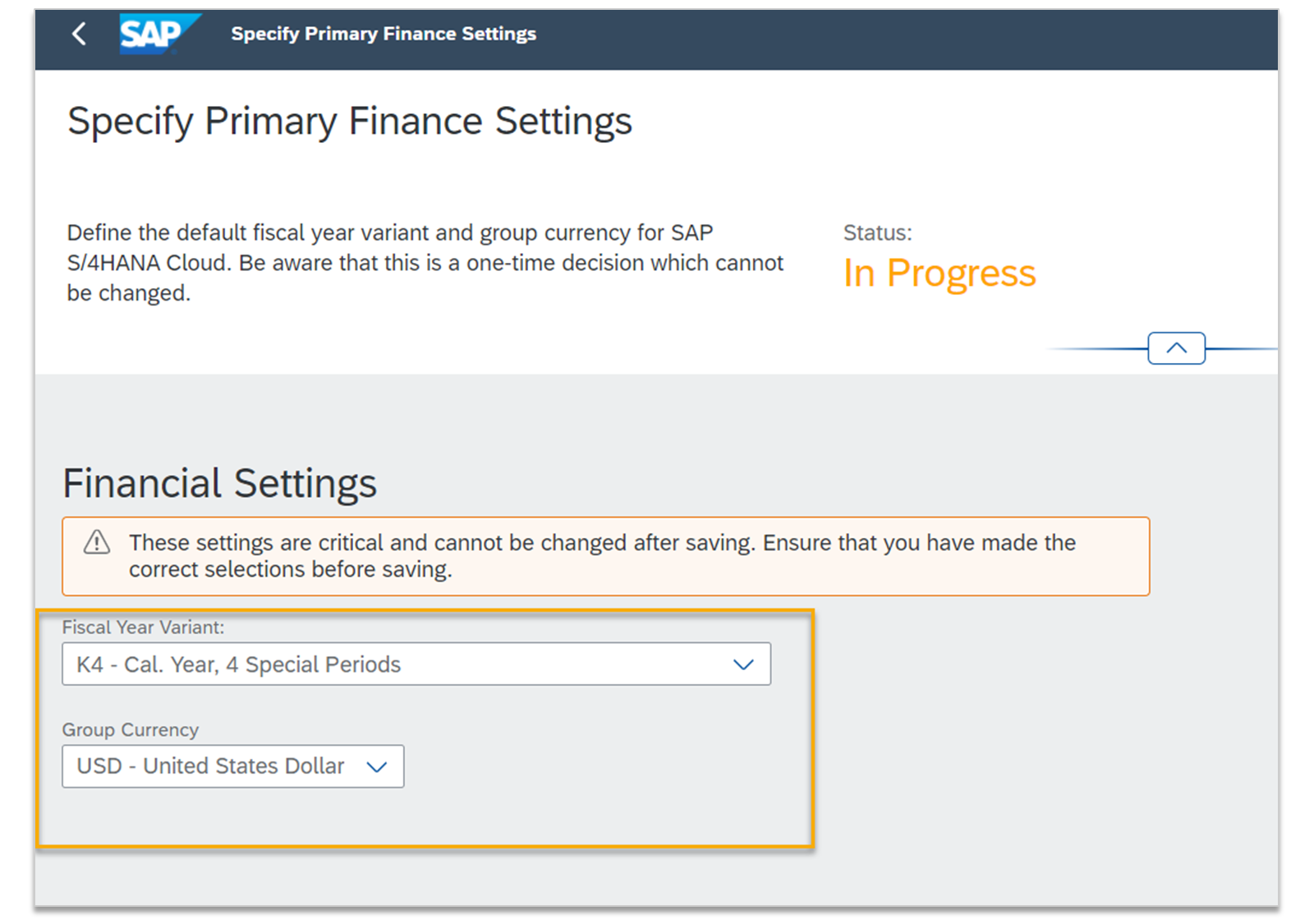 The following types of relationships exist between the units of an organizational structure:

Note
Non-confirmed entities are in the "staging" area, where they can be easily changed or deleted. Make sure you confirm only the units you want to deploy to the back-end system. Once confirmed, the entity cannot be deleted!

When you are finished maintaining the organizational structure, select the Confirm button to confirm the entities, then complete the activity.

The Confirm Scope and Organizational Structure is Completed milestone initiates the installation of the Quality system. You can check the provisioning status of your systems from the Systems tab in SAP Central Business Configuration. 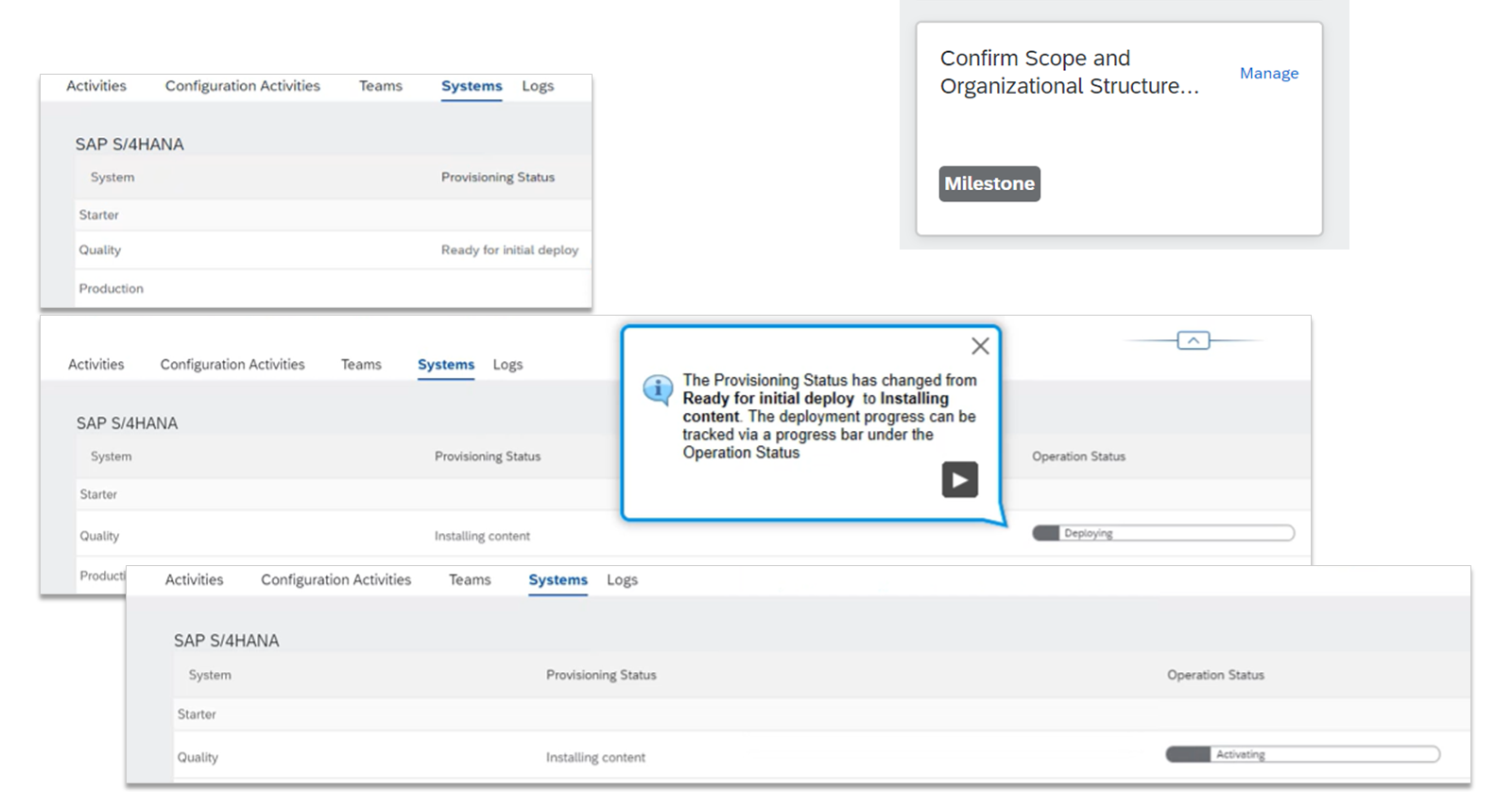 The provisioning statuses are:

Note
Try it out: Request the production system

As with the Quality system, the Production system must also be assigned to a deployment target.

Initiate Change to an Earlier Phase (if necessary)

If you need to change or add something done in a previous phase, you can select the Initiate Change button in the upper right corner of SAP Central Business Configuration. You will then be prompted to choose the information you wish to change, for example, activating an additional country or business scenario (scope item).

Note
Try it out: Initiate change

Activities Completed in Other Systems

Configurations done in SAP Central Business Configuration need to be transported to the SAP S/4HANA Cloud Quality (Q) system for testing, then the Production (P) system. On the Systems tab, you select the Release Transport button for the Q system. After the initial transport, you are able to release transports to the P system.

The Operation Status column provides a progress bar indicating the status of the transport.

Note
Try it out: Release the configuration

Each transport generates a log, where you can view the user that released the transport, transport description, and the date and time of the transport.

Note
Try it out:Maintain current settings in the production system and complete the phase